I have been working on these blocks for a couple of years now. 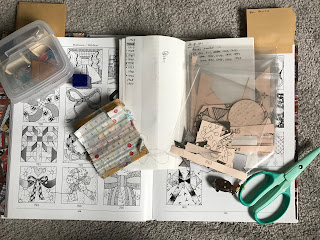 I found out about Chuck Nohara from flipping through the Quiltmania book catalogues and magazines over the past few years. I saw more of the blocks on Instagram and then I saw Lorena Uriarte’s Chuck Nohara quilt up close. I was fascinated. I signed on to do a 5 class course with Lorena (it was once a month, I think it was 5). Anyway, as a pre requisite for the course I had to buy Chuck Nohara’s 2001 New Patchwork blocks published by Quiltmania (reprinted with permission by Nihon Vogue)

For all of us who like to make stuff, I’m pretty sure it’s fair to say we have loads of books and magazines about the things we want to make (or think we’ll make later).

But this book, for me, is different.

For starters, it’s 2001 blocks - literally. So for a body of work it’s impressive. Really impressive. Let me put it this way, you try designing 2001 of anything let alone 2001 quilt blocks. In Fact Chuck Nohara designed 2800 blocks and selected 2001 blocks for the book.

Here is the West we seem to think that quilting is all our own. Quilting didn’t miraculously appear during the Prarie Migrations in the 1800’s in the US, nor did it appear during the 1930s or the 1970s. Quilting had surges of popularity due to necessity or nostalgia, but it’s been pretty much there in the backgrounds of our lives for centuries, across many cultures and we have all borrowed from each other in the true quilting tradition of taking something old to make something new. 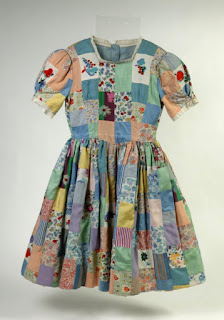 This child’s dress is from the V&A collection in London. It’s a lovely example of “Make Do and Mend” - a major feature of British life during World War 2.

Quilting in Japan goes back nearly a thousand years and finds it basis in the threads of Boro Boro. It’s no wonder that the numbers of quilters in Japan are in the millions and that quilting is a large part of life for many women there.

Chuck Nohara introduced Western Quilting to Japan in the early 1980s. She was the first. It’s because of her passion for this art (because it is an art) that Quilts Japan and Patchwork Tsushin have thrived. Scores of quilt shops have popped up around the country and the International Tokyo Quilt Show sees over 350,000 visitors from all over Japan and overseas going through it every year. 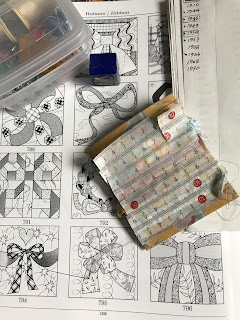 From the minute I started looking through Chuck Nohara’s book I knew Ms Nohara had had formal design training. Composition, balance, the depiction of light and dark to create contrast, it was all there.

As I dug deeper, I found out that I was right. Ms Nohara had studied Design in Hawaii and then Milan.

I understood the mastery of the quilt blocks and how clever each one was. The blue prints for the successful completion of each block was all there in the design drawings. Clear and precise. 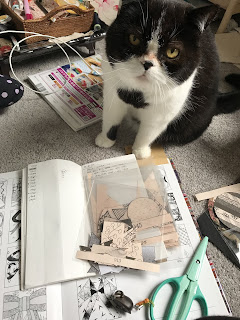 Bea-Chan likes to quilt too.

I isolated the blocks I wanted to do, copied them all in the size I wanted and put them in a Kunikuyo expandable folder (I use these for my quilting all the time) and started to make them. I’ve put them up on Instagram as I have finished them, I’m going to put them all up on a Pinterest Board that’s all ready to go once I get the pictures up ( you can check that out in the next day or two) .

As I have completed blocks, I have found each block has taught me something. Wether it be about colour balance or composition or about placement - I have found myself continually learning. I love that. There is no such thing as knowing it all, no matter how good you think you are. Knowledge has holes, and the more you fill those holes the more holes pop up as a response. That’s fantastic. It’s amazing and awe inspiring.

These blocks are doing this for me.

Out of the blue it struck me today that I’ve not been approaching the 55 blocks I’ve done in the way I think I should. This means that I’m going to redo some of them. I’m pretty sure I’ve approached these blocks from a very western mindset. I’ve been looking for short cuts and I’ve used plenty. In some respects that’s been ok, but sometimes prescision and care needs to beat expediency and convenience. When that’s done, the results speak for themselves. Attention to detail.  Something we aren’t very good at here in Western countries and something that Japanese quilters excel at. I’m pretty sure that focusing on attention to detail in my quilting, sewing and illustration will be satisfying creatively and I’m prepared to give it a crack. Again, these blocks teach me every single time.

That’s why I consider Chuck Nohara my Sensei and mentor. In the truest sense of the word. When I spend time with my Chuck Nohara blocks I’m learning from my teacher.

I found out a while ago that Chuck Nohara had lost her business, her marriage and everything had been awful for her. I had also seen Western quilters claiming her blocks and using her as an afterthought if any thought was given at all.  I put away the blocks I was working on. It all made me feel very sad about my Sensei and what had happened her. Friends would ask me why I had stopped working on the blocks. I don’t think they understood why I had stopped working on them. For me, quilting is personal. When I sew, and quilt, I’m normally making something for someone. As I make something, life is going on at the same time. All the events that happen get sewn into the fabric and threads, it’s all there. So it felt personal to me that my Sensei had been through so much.

In the end, I had to pick up the blocks again. I’d flip through the folder, the blocks I had done were all there and looking at me. A good friend of mine (yes you Elizabeth) suggested that the blocks were a celebration of the skill of Ms Nohara and she was so right.

But life is an incredible thing. Quilts Japan published an article on Sensei Nohara a couple of years ago and I only found it by chance about 18 months ago. Sensei Nohara left Tokyo to go and live by the sea in a lovely house with massive windows that look over the ocean. The house is filled with all sorts of antique and vintage quilts, knitted and crochet textiles, beautiful flowers and Knick knacks of all descriptions. It’s the house of a soul that designs and what’s more, it’s also the home of a very furry cat.

Sensei Nohara has come through hardship to the place she was always meant to be.

When I pick up her blocks now, to make them come to life, I think of the sea. And a very fluffy cat. 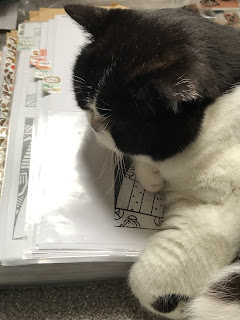