hiya,
I'm back. I have finished my designing - for the time being. I have been so focused on tha, I haven't had any room in my brain for anything else. But, now I send it off into the wild blue yonder.
Its been a month, and here I am at my blog. I am tucked up in a doona on the lounge at the moment. I am sick, really sick. My little girl is at her Grammy's until tomorrow. SO here I am, the house is like a tomb, I really miss her. So, all that's left to do is watch I don't know how many episodes of the Rose of Versailles on you tube while I post here. And there will be a feature lenght remake of the Rose of Versailles coming out this year. It will be in Japanese but here's hoping a great english sub version won't be far away. And here is a wee picy: 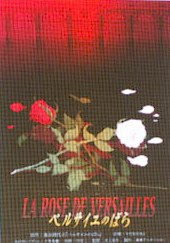 Hit google or you tube and have a wee look if you are interested. Ever since I was a kid, when I saw "Kimba, The White Lion", I have had a real soft spot for Japanese animation. And not all of it mind, it's like anything. Some of it's good and some of it ... well, not so good. The Rose of Versailles is Japanese animated soap set in 18th century france. Perfect for a girl with the flu feeling less than shiny.
I am going to write something about dolls now, so if you get bored by that, look away, get a coffee whatever. I am sick to death of trying to chase BLythe dolls, just sick to death. Its been hard, way way way too hard. If these dolls are really only available for collectors in Japan to get, then the company that produces the doll should have the guts to say so. Dealers charging hughe prices within days of a release, the bulk of the dolls being readily available in Japan and really no where else. The CWC so called lottery system. I have had it. I found one of my old pullip pictures on the old mac. Hit the net and bammo ... have a wee squiz at what's coming to my house: 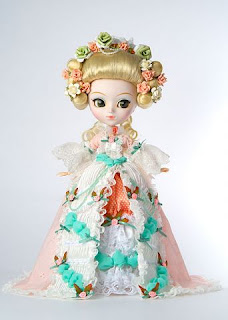 Taa dah!!!! She has a bloke coming with her as well, poncy old Alberic. Don't you just love the idea of an 18th century play doll? Me? I loves it, I really do. Will post piccies here when they arrive. Have earmarked another three after these two. Hmmm, now the 64 dollar question, how to pay for them .....
Anyway, done talking dolls, you can come back now. Will post again later on today/ tomorrow about some other stuff.
Posted by Jo Ellem at 14:11 No comments:
Email ThisBlogThis!Share to TwitterShare to FacebookShare to Pinterest
Newer Posts Older Posts Home
Subscribe to: Posts (Atom)